Only one day after the Boston Marathon was turned into a bloodsoaked terror scene, Homeland Security Director Janet "We Need To Search Your Child's Genitals" Napolitano said there was "no evidence of a broader plot" despite having no idea who had committed the bombing or why. But her statement was necessary to keep up the Administration's campaign assertion that Barack Hussein Obama had personally won the war on terror when he kicked open Osama bin Laden's bedroom door and put a couple of hot rounds in the old fart's eyehole.

For Napolitano to make such a statement in the absence of evidence amounts to intentional misdirection. A lie about terror committed against Americans - very much of the kind told, and still maintained, about the successful 9/11 terror attacks in Benghazi.

But now Janet's story is falling apart. The FBI is hunting for a suspected 12 member "sleeper cell" of radical Islamic terrorists who may have worked with the Boston bombers. Exactly the scenario that Janet Napolitano and Barack Hussein Obama have been telling us - and presumably law enforcement officials - not to consider because it's politically incorrect. Which is why, in all likelihood, that the government ignored high-level intelligence warnings from Russia as recently as last November that Tamerlan, the older brother, had been working with terrorist trainers overseas and was too dangerous to allow back into the United States.

All of which makes us think that when the FBI is rounding up those who have helped enable Tamerlan and Dzhokhar Tsarnaev, the names "Napolitano" and "Obama" should be high on the list. 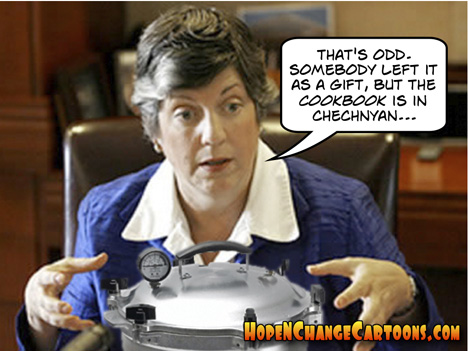 Homeland Security's Queen is Under Pressure.