When asked about the nightmarish horrors of Dr. Kermit Gosnell's abortion clinic, the president (who has previously advocated killing infants who are born alive after a failed abortion) said that he couldn't talk about a legal matter which was unresolved but, like Bill Clinton, he believe that abortions should be "safe, legal, and rare."
Hope n' Change was baffled by what meaning of "rare" he could be referring to, until Mrs. Jarlsberg explained that the dog-eating Mr. Soetoro was probably using a culinary term.

Where The Sun Don't Shine

With Barry's passion for abortions still sadly in mind, Hope n' Change created the cartoon above because A) we think it shows how his mind works and B) because we think he's an a-hole and C) because it struck us as funny to think of these two muttering stupid ideas in the dark. Then again, we sometimes drink at work. 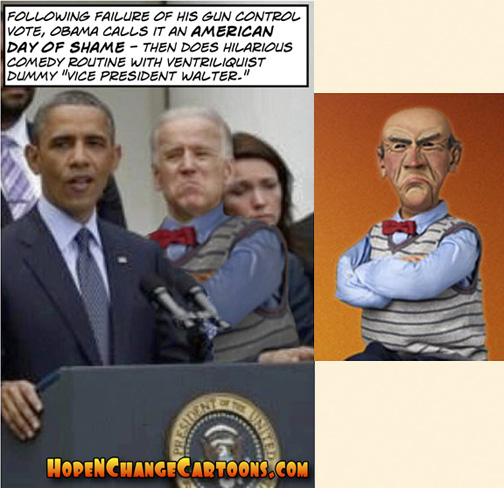 When Obama stood in the Rose Garden whining, pissing, and moaning about the utter failure of his gun control bill, we couldn't help but be distracted by Joe Biden's ridiculous mugging for the cameras. We knew we'd seen that pouting face somewhere before...but where? And then it hit us: ventriloquist Jeff Dunham's grumpy old puppet, Walter.

Although frankly, Walter is better looking, smarter, funnier, and less of a puppet than Uncle Joe.